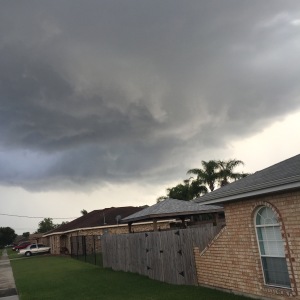 In the past I’ve posted random pictures I’ve taken.  This one I took  a couple months ago.  I think what struck me at the time was this was a perfect image of how I, or I guess most people feel sometimes.  I don’t want to come across as a pity party but you ever feel like where ever you go there is a dark cloud looming over you?  Like everything is just working against you?  Well this particular day this cloud was hanging out right over our house when I walked out.  It wasn’t much bigger than what was shown in the picture and appeared exactly like that- no filters.  I saw it and felt “Yep.  There you are.”  At least this time my dark cloud wasn’t invisible.  It actually showed it’s face. 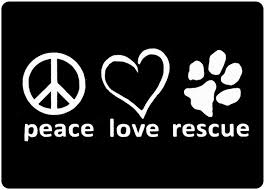 Rescue is what I wanted to do.  There are certain television shows in our family’s weekly DVR list that are based on rescuing animals and giving them a chance at forever homes.  There is one show in particular I have been a fan of for several years that really opened my eyes to all the great dogs that don’t have homes.  Although I thought rescuing wouldn’t be for me, I found myself slowly turning the tide and mentioned the idea to Cristina.  No surprise here that she was all for it and so the hunt began to find the perfect dog to mesh with our family.

There is a local rescue we are drawn to that gets lots of national attention and they really need as much as they can get.  With 300+ large dogs to take care of, being kept in a spot light helps tremendously.  This particular rescue always talks about the importance of getting their dogs homes.   After talking about it as a family, Cristina and I decided this would be where we would put in our application due to the amount of dogs this rescue had.  With that conversation we put in our application choice for this precious baby: 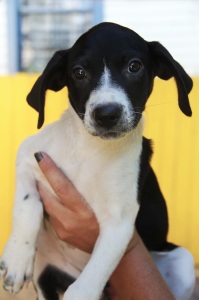 I probably shouldn’t have done this but I KNEW this girl would be ours.  Nothing could have been further from the truth.  After waiting about 2 weeks we received a call back only to be told that they didn’t think she would make a good fit with our current dog who is 12 years old.  They felt she would “aggravate the hell out of him.”  I tried to explain that our dog Hanzel is well acclimated to dogs of all ages, sizes, shapes, and personalities.  He has several dog friends and does well with everyone.  I was still denied.  They felt a puppy would not be good in our household.

Well instantly this left a bad taste in my mouth for rescuing.  I knew any dog would be happy in our home.  Not to mention we would never acquire another dog in our home if Hanzel, our Min Pin, would be unhappy.   Needless to say this hadn’t deterred us and we applied to yet another rescue in the attempt to give another dog a forever home.

The following Saturday we met someone at a smaller local rescue and he asked that we bring our dog to meet the puppy we were interested in.  We waited all day to go back at our designated time with Hanzel.  The dogs met and everything was fine.  Seemed like a done deal until they noticed Hanzel wasn’t neutered.  Although their dog was altered they would only give her to us if Hanzel was as well.  When I asked what is the purpose since their dog was fixed, the answer was that he may get out of our yard one day and impregnate other dogs.   I replied had I gotten Hanzel as a baby I would have gotten him altered but I rescued him at 4 years old.  I figured he had lived that way for 4 years I wasn’t going to put him through it. She stated again that without verification from our vet that the surgery had taken place, we couldn’t have their dog.  And here is the kicker:  Even if I do get him fixed they will not hold her and its possible I spend the money and put my aging dog in surgery for NOTHING.

And so I’m pissed.  I’m pissed because the first rescue has many “lifers” there that could have possibly been adopted but are too choosy.  I’m pissed because that first baby we wanted had already been there for 8 months and will continue to be there because you insist my dog will react a certain way when you don’t know him.  I’m also pissed because the second rescue insisted that my dog could get out and whore around as if I am some unresponsible pet owner because I hadn’t gotten him fixed.  I’m pissed because we dedicated a lot of time searching for the perfect dog and filling out these lengthy applications short of giving our blood type to end up empty handed.

Seriously all selfishness aside I REALLY wanted a Dogo Argentino or a French Bulldog.  I, however, had put those feelings away and thought it would be best to rescue because all dogs at breeders will find a home.  I wanted to do the right thing.  I wanted to adopt.  As I appreciate all the work these rescues do because it is a hard job, it leads me to believe that the reason so many dogs are at these places is because the interviewers are passing up good homes.  Based on this experience, dog shopping we go.

Get Out of My Village

I liked this article so I posted on my blog.  Clicking the link below will bring you to another website.  Remeber to come back and checkout my other posts on MadPadExperiment.com

Get Out of My Village. 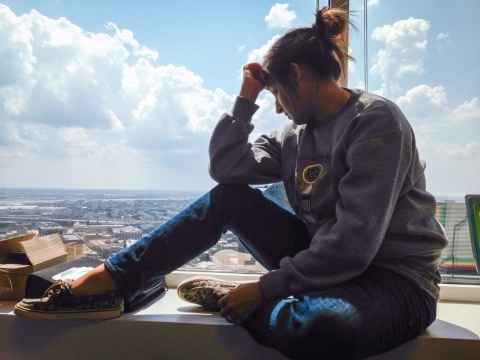 Last month I posted a photo blog called “Modern Day Spiderman” and described the time I took a picture from my office window that wound up being one of my all time favorite in my self proclaimed photography career.  Oddly enough almost two years later I would take another favorite photo of the very same window.

Cristina and I were having lunch together and had some time to kill so we decided to sit in my office for the remaining time.  The weather and view were beautiful so she decided to hop up on the window sill and look out for a bit.  Unbeknownst to her as we were talking I decided to take a quick snapshot.  I seem to do this often of which her reaction to the camera click is always a quick turn around and, “What are you doing?”

I couldn’t pass up the shot with the contrast of the sun shining on her and the shadow.  The sky and the clouds just made it better.  Too bad I had junk on my window sill that day but oh well.  Since it wasn’t staged that is just how it had to come out. 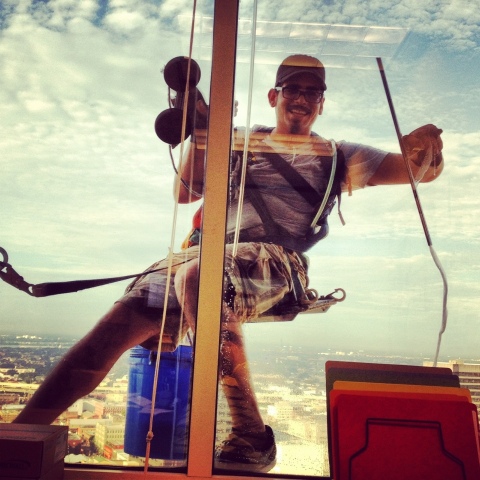 This picture is easily one of my favorite pictures I have ever taken.  Many times I have seen guys dangle outside like spider men to do a job not many would do.  Last year I was in my office and I saw this guy cleaning the windows outside and I thought it would be a great opportunity to take a picture to  post on my Twitter and Instagram accounts.  As I was about to snap the picture this guy waved and smiled which I thought was extra cool since I had actually thought this guy’s probably going to think “REALLY????” and go about window cleaning.  To my surprise I was greeted with a friendly wave and smile.

As I got to thinking about it I wondered how many pictures these modern day spidermen would have of themselves 29 stories up.  Unfortunately, I was too slow to catch him waving but was still in time to catch him smiling.  Through contacts in our building I was able to email someone at his company with the pictures.  Needless to say, Elio Maden had received the pictures and emailed thanking me as he never had a picture taken of himself from the other side of the glass. 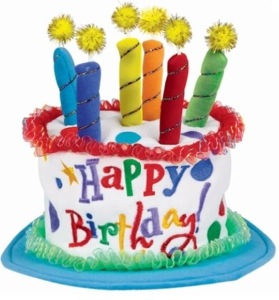 Happy birthday, Mad Pad Experiment!  It’s day one and where do you start?   Somehow I’m already proud of this.  Proud of this space.  Where I can jot down my every mad thought.  Where I can regurgitate everything that bounces around this pinball machine of a mind.  That’s the best way to describe it.  I use that reference often- pinball machine  My mind is never still running a cool 200 MPH all the time everyday.  Tiring?  At times.  But after 35 years I’m used to it.  🙂

I’m the type of person that makes the effort to put down my iPad.  Otherwise I can be on it for hours on end.  Not playing games (although I do at times) but reading.  Reading nonstop, but not books.  My mind has this thirst for knowing as much as it can.  My curiosity is 100x as that of a cat.  I Google everything.  I have called myself the Research Queen.  How does this work?  What does this mean?  Googling people’s lives.  Googling history.  Events past and present.   Reading the news.  Reading until there aren’t any more articles and then moving on to the next site to read all of theirs.  I often stop myself from telling people I know about this topic already that they are discussing because I read about it weeks ago.  I don’t want to ever seem like the annoying know-it-all, but I did know.   I don’t know anyone’s curiosity that matches mine.  I mean I’m sure there are people but in my circle I don’t think anyone relates.  From the most interesting, complex topics to the silliest odd facts. Like did you know Mozart’s sister could’ve been just as famous and influential? Yep. She had to quit b/c she was a woman. Well now you know. 🙂

A blog about Linux, Openmoko, R/C, electronics and more

My Life In Blog

The Story Of A Guy With Too Much Time On His Hands.

A Global Network Of Passionate Volunteers Using 3D Printing To Give The World A "Helping Hand."

The Wonderings of a Wurzel Woman
Shutterspeed

BrakeThrough Media on the road, off the cuff.

"I Said I Don't Know."--and Other Answers to Hard Questions

My thoughts and adventures